Many of you will know that a lot of my work involves hollowing.
Over the years I Have owned or tried a number of different hollowing systems.
I thought I would give you my views on a few different systems.
I have no allegiance to any manufacturer and no axe to grind.
This is just my own personal view.

The first system  bought was the Hamlet Big brother and Little brother systems.
Because this system did not have an articulated head I thought this would restrict the kind of hollowing I would be able to do.
To overcome this I made my own handles with articulated heads from stainless steel.
The big one is 1000mm x 20mm and the small one is 740mm x 16mm . 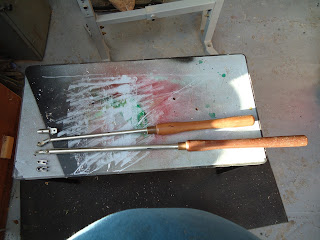 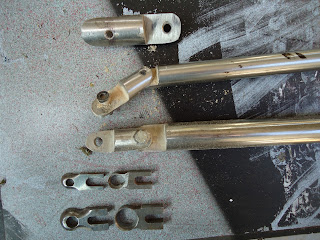 These worked but I cant say as achieved a great deal with them which was probably mostly down to my lack of skill at the time.

The next system I bought was a Lazar guided deep hollowing system that was fixed to the lathe bed and the cutter arm rested on the tool rest.
This is a very good system and the only thing i could fault about it is that it is very impersonal.
It was too much like using a machine.
That said you can hollow through a reasonably small hole and due to the Lazar guidance facility you could hollow very thin walled vessels with ease.
This system would be ideal for anybody that suffered with any weakness in their arms.
I still have this system and you can have it for £120  00 + shipping. 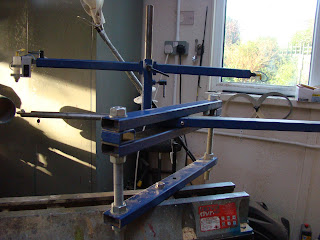 Throughout the evolution of my hollow form turning﻿ there are two tools that I have had since day one and still frequently use.
They are the Robert Sorby scraper that I use with a round cutter for shear scraping and the Henry Taylor scraper that are used with a variety of tips. 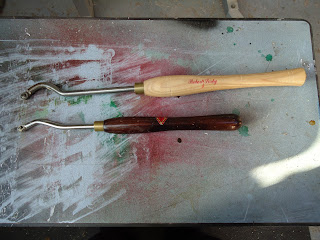 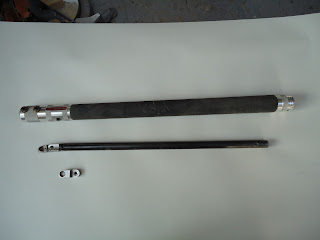 The Roly Munro that I have is the 5/8"  and has given me good service for several years.
The only thing i was disappointed with was the handle within days of buying it the thread on the grub screw that holds the shaft in stripped.
A mate of mine who is an engineer fitted a helecoil in the handle which cured the problem.
I think they have done something since to improve the handle but I am not sure.
To me the handle seemed a little bit light for the shaft so I have been using the Robert Sorby handle which seems to balance the shaft perfectly.
All in all I think this is a great tool and has always done everything expected of it.
Next my 1/2" Kelton scrapers. 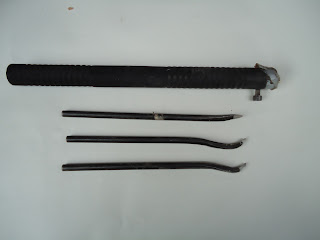 I have been using the Kelton scrapers for a couple of years now.
For the past couple of years I have used these for most of my hollowing they are that bit thinner diameter than the Roly Munro enabling me to work through a smaller hole.
Being only 1/8" thinner does not seem a lot but it is surprising the difference it can make when hollowing.
I use these with the handle for the Roly Munro I bought them un handled and they seem to be nicely balanced in this handle.
These are a very cheap option for hollowing as they are reasonably priced and quite capable of hollowing to about 8" deep.
Although these have been used  for most of my hollowing work in the last two years  the only sharpening they have needed is to hone the tip with a diamond hone occasionally.
The Robert Sorby Sovereign Ultima.
Below is a link to a short vidio on the Sovereign system.
http://robertsorby.co.uk/sorbymedia//ultima.wmv

I do not own the Robert Sorby Sovereign system but I have had access to one and  have seen it demonstrated by Chris Pouncy from Sorby.
In my opinion it is a well engineered piece of kit over engineered if anything.
It does everything that Sorby claim it will do but I feel that the big diameter head restricts it for working through a small hole.
It is a pity they did not make the head the same diameter of the shaft.
The handle is superb and as I have said previously I use it on the Roly Munro shaft.

I have bought this new system but as yet have not had the time to try it out due to pressure of work.

I hope to be able to give it a proper work out later in the week and will be giving you my opinion on it.
Yesterday I had a day with Mark Sanger and had a play with the new Crown texturing system.
I did not intend doing very much I was going to have a quiet day.
But being the workaholic that I am I could not rest when I got home.
I have been intending to give the Revolution hollowing system from Crown a workout when I had time.
Well I have just had an order for ten hollow forms for a new gallery  so this is an ideal opportunity to give it a go.
At six o clock I thought I would give my workshop a good clean but after about ten minutes i spotted the Revolution hollowing tool and decided to give it a go.
Earlier in the day i had picked up some Sycamore that has been drying for about 6 years and it is nice and dry.
I managed to get two nice hollow form blanks out of one of the pieces and noted that it had started to spalt.
My order for 10 forms are supposed to be coloured but these are just too nice to colour.
If the customer does not want them somebody else will.
The blanks are from branch wood and the pith is in the centre so I mounted the first one with the pith aligned to the centre of the vessel.
I completed the outside and sanded down to 600 grit.
Next I drilled an 18mm hole to within about 3/8" from the bottom ready for hollowing.
First i cut from the centre to the underside of the shoulder with nice sweeping cuts and as i went deeper I found the tool would cut on both the push cut and pull cut equally well.
There is a bit of a knack to getting the best cut but once you find it it is not difficult to repeat.I took out the bulk of the material then went on to carefully refine the thickness to about 1/4 of an inch which is not too bad for a vessel of this size 8" x 8" .
The surface was surprisingly good considering the wood is spalted and a bit punky.
I would probably have been satisfied with the finish but i had not tried the scraper yet.
A few minutes with the scraper and the finish was good.
I sanded inside as far as I could reach reversed the piece into a jam chuck ready for buffing and polishing.
I completed this one from start to finish in a little under three hours.
I never intended doing this much and it was 9 pm when I finished 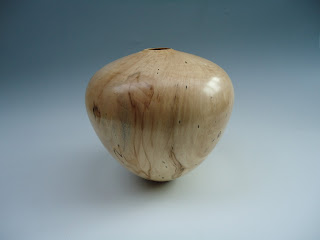 That was yesterday.
This morning I completed the second hollow form which is exactly the same size in just under two hours.
This one is a little over 1/8" thick .
I am pleased with that as it shows I have now got the knack of this new tool. 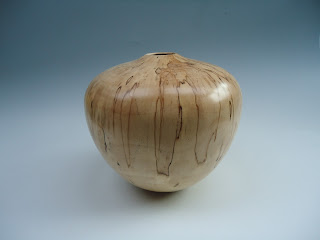 I first had a go for about five minutes with this tool at Mark Sangers a few weeks age and this is the first opportunity I have had to give it a real go.
My first impressions then where that this was going to be a great tool and my experience on these two hollow forms bears this out.
As I have said before I have no axe to grind and no elegance to any maker.
This will definitely be my tool of choice for hollowing in the future it is unbelievable value for money when you compare it to its rivals.
I have had several Emails asking where can they buy the Revolution hollowing system from.
I bought mine from Mark Sanger.http://www.marksanger.co.uk/revolution%20hollowing%20system.html
Posted by George Foweraker at 08:14