I try not to work on a Saturday but sometimes you have to put yourself out because not everybody can make it in the week.
A couple of days ago I had a very heavy cold start so that made life a bit hard for today but Tim and Ben were such good company that it made life much easier.
I telephoned and spoke to Ben last night and told him I had a heavy cold and if they wanted to postpone it would not be a problem but the came anyway.
I am pleased they came and the results make it all worthwhile as they both made very respectable bowls as you will see from the following pictures.
Ben and Tim live in west London so it was a bit of a drive for them but hopefully they will think it was worth it.
Ben is only 16 years old and still at secondary school so it is nice to see a youngster taking an interest in turning 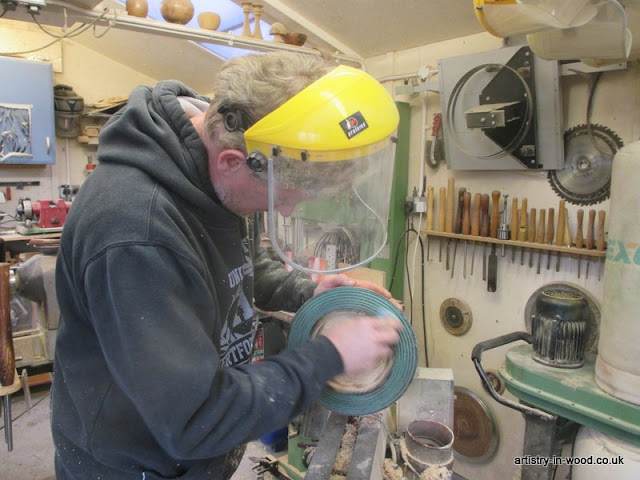 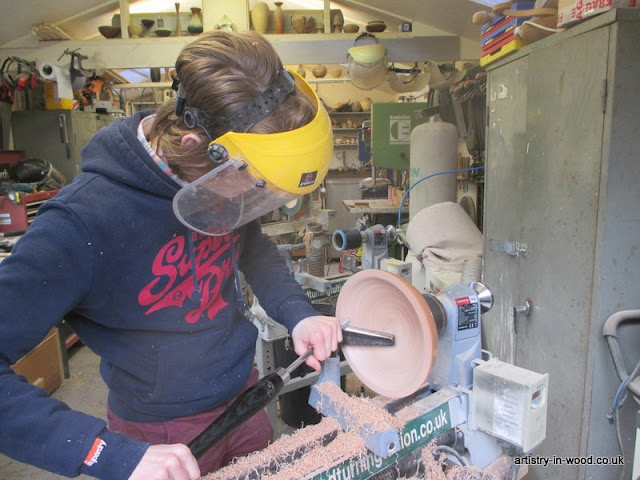 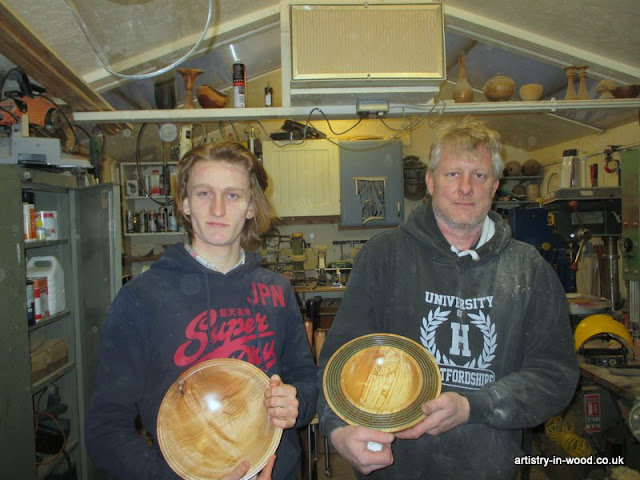 Posted by George Foweraker at 12:18 2 comments:

On Monday and Tuesday this week Tim from London has been here to improve his Bowl turning.
Tim has been Turning for about ten years so you would think it would be easy just to polish up his basic tooling but life is never that simple.
The first thing Tim said was I turn left handed So I told him with my usual tact and diplomacy not here you don't you will turn right handed as I don't teach left handed turning as far as I am concerned there is no such thing as a left handed turner.
I asked Tim just as a matter of interest show me how you turn left handed. With a bowl blank mounted on the lathe he walked to the other side of the lathe leaned over the lathe bed and was about to start turning. I had never seen anything like this before it looked so awkward so I could see it was going to be a bit of a task to completely change the way Tim had been turning for the last ten years and get him to do it properly.
To be fair to him Tim took on board that the correct way to turn is to work right handed after I explained the advantages also safety was a big concern as reaching across the lathe bed raises all sorts of safety issues.
After two days of what must have been a nightmare for Tim he has adapted very well and has promised me he will stick to the right handed turning as he can now see the sense of it.
This just emphasises the advantages of having tuition with a professional turner rather than trying to teach yourself.
I am confident that now Tim has sorted out his basic tooling skills he will go on to be a good turner.
Very well done time for being open minded enough to grasp the nettle and change what must have seemed very difficult at the time .Stick to the right handed turning Mate and you will be OK any problems give me a ring.

Two very nice bowls one in Beech and one in Sycamore. 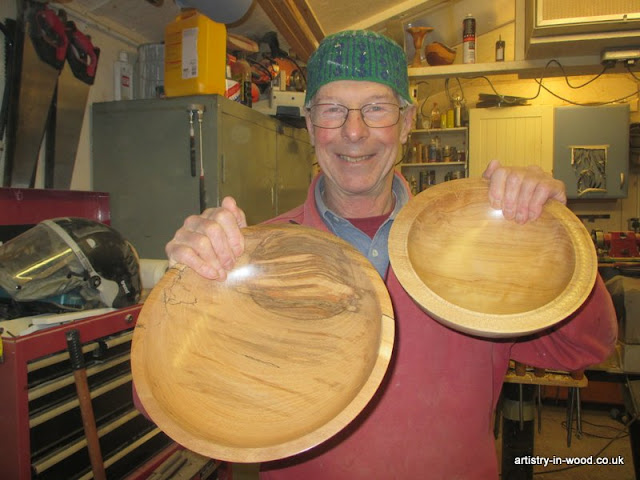 Posted by George Foweraker at 02:41 4 comments:

Today my Students Keith and Amber a very nice couple and a pleasure to teach.
Keith and Amber turned a couple of very respectable Beech bowls.
Don't they look pleased with themselves and so they should the did very well . 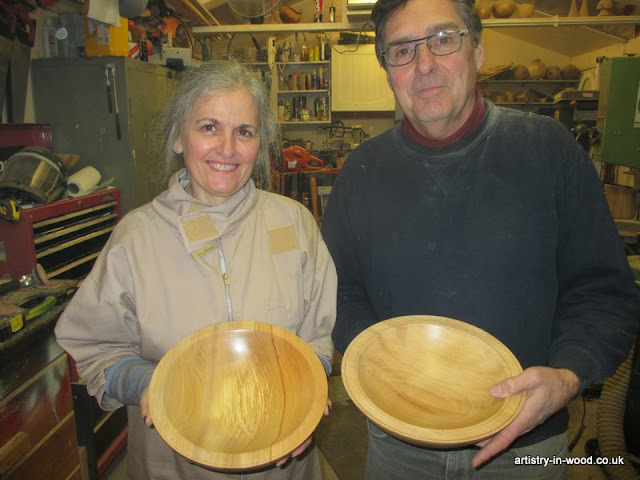 Posted by George Foweraker at 11:39 2 comments:

Mike with his Beech Bowl

Today my Student was Mike who come to me for some bowl turning tuition.
Nice Bowl Mike very well done. 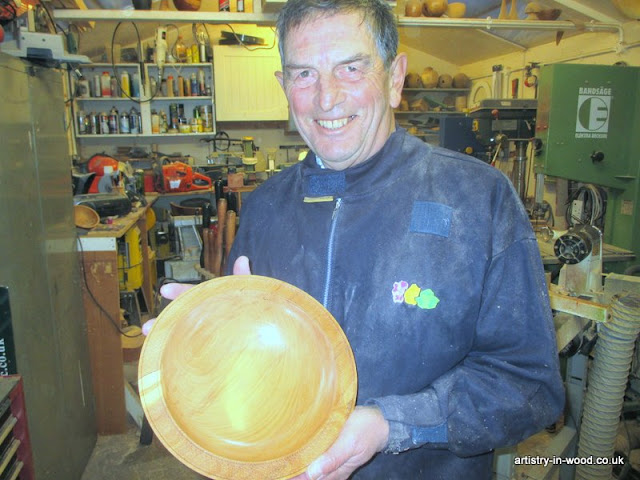 Posted by George Foweraker at 10:49 2 comments:

Back to work for another year

I have treated myself to a nice long break over the Christmas and into the new year. Today was by first day back and I have spent the day teaching.
I have cut down on my teaching and only do two days a week now,that is between two and four Students a week this leaves me enough time to make stuff for Galleries.
Todays Student was Doug who is considering taking up turning for a hobby in his retirement I am confident after today he will take up turning because he enjoyed it and the Beech Bowl he has made shows he has an aptitude for turning.
Doug is off to Australia for six weeks and has promised to come back on his return for me to advise him on what equipment to buy.
very well done Doug that is a very nice bowl. 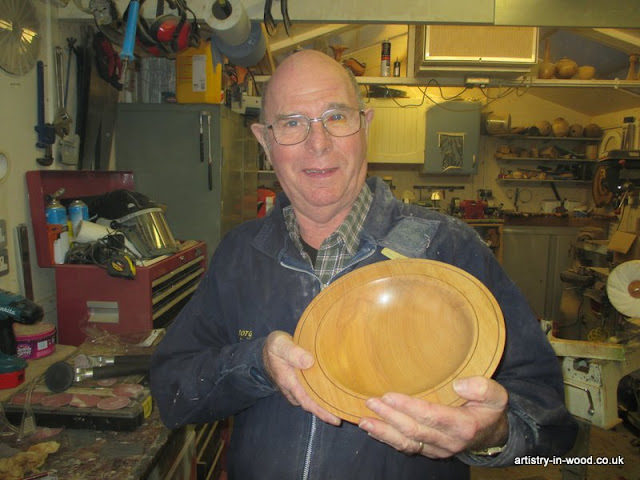 Posted by George Foweraker at 11:17 2 comments: