Gary's wife Ellenor treated him to a days woodturning experience and he was with me today.
I am on a bit of a run still, Students that are easy to teach I wonder how long it will last.
Gary turned a very nice 11" beech bowl with a textured rim.
Gary is not ready to take up woodturning as a hobby which is a real pity because he has taken to it really well.
Sorry about the music Gary LOL 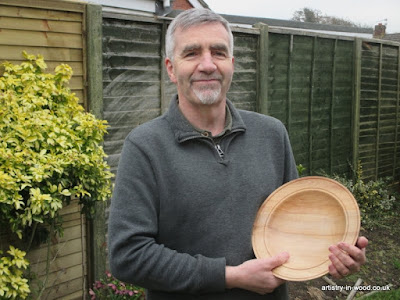 Today James was with me  a Christmas present from his wife Catharine.
Most of the time I speak to potential Students prior to their coming here to access their experience or lack of it so that I can plan the day to make sure they get as much as possible from it.
When James arrived this morning I had no Idea what experience he had or if he had any at all. Well it tuned out he had about 3 years experience and a day and a half of tuition with another Professional turner.
When I asked him what he wanted to do for the day he said he wanted to learn as much as he could possibly Texturing and colouring or Hollow form turning.
We settled for Texturing and colouring and make sure he had not picked up bad habits.
We quickly ironed out a few bad habits  and then produced the bottom of a wide rimmed bowl .
After turning the bowl  James created a wide rim and prepared it for texturing and colouring as the following pics will show.
We got through a lot today and as you can see it was well worth it very well done James

Sanding the rim ready for texturing 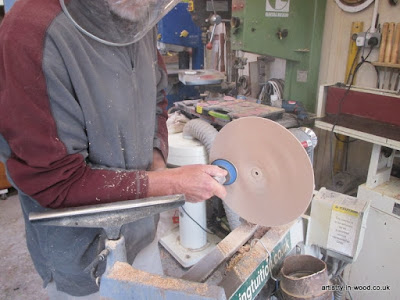 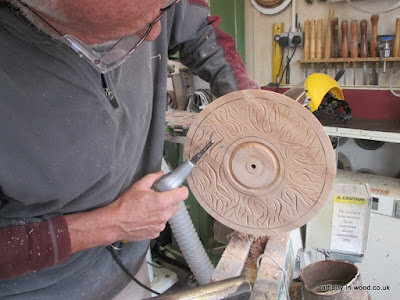 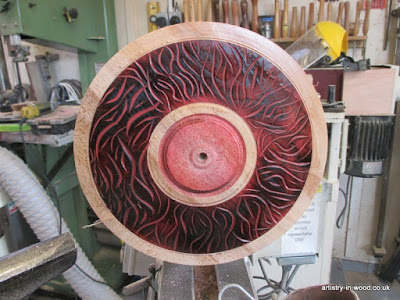 Texture and colour removed to try something else 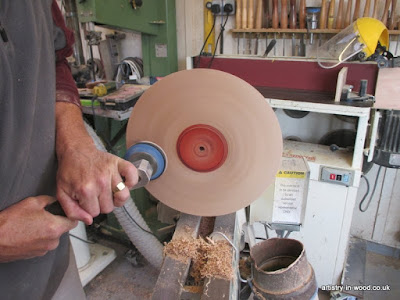 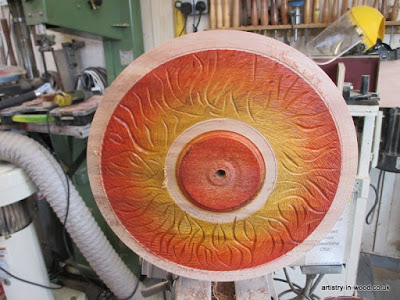 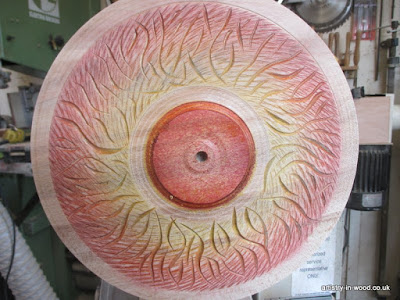 Carving removed and another texturing and colouring exercise 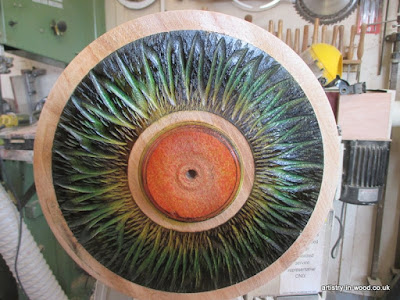 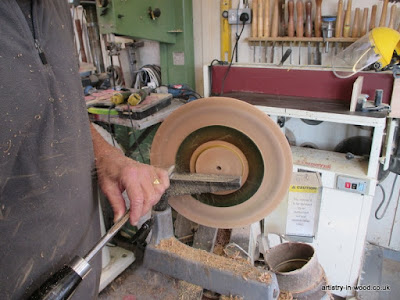 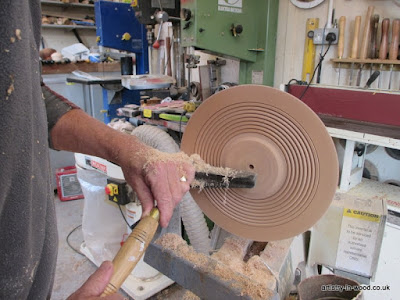 Rubbing in the Verdigris wax 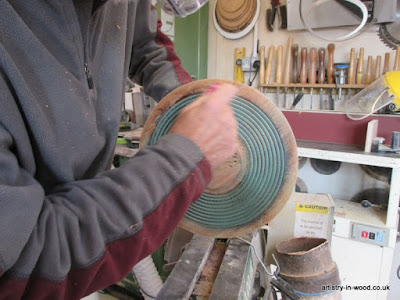 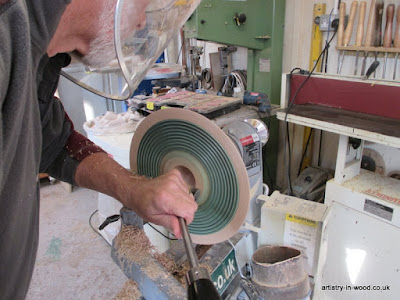 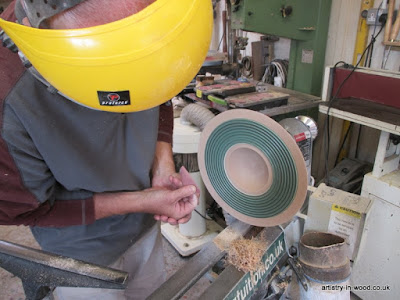 Bowl reversed and james is removing the spigot 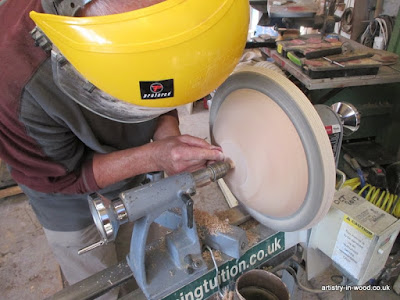 All done and a photo opportunity. 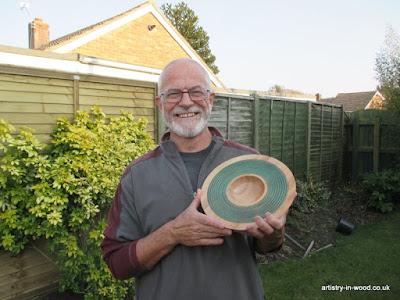 Posted by George Foweraker at 11:59 No comments:

Andy my Student today was here for an experience day as a treat from his Wife for his Birthday.
He was good easy company and took too woodturning like a duck to water.
I have been very lucky lately all my Students have been easy to teach which makes life easy for me.
Andy turned a very nice beech bowl that had a lot of figuring in it as you can see from the pics.
Not the easiest bit of wood too turn but Andy managed it without any problems. 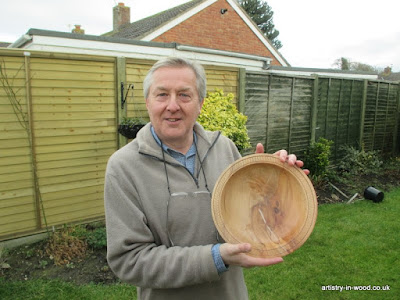 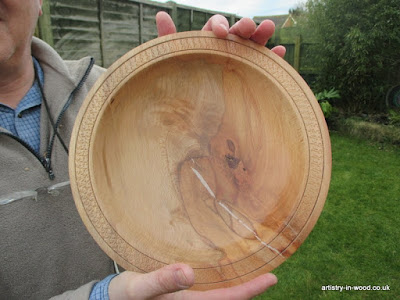 Posted by George Foweraker at 10:05 2 comments:

Today Malcolm and Tasha had a days woodturning experience as a Birthday present from Tasha to her Dad Malcolm.
They were really good company and a pleasure to teach and as you can see from the following pics they both turned very nice Beech bowls. 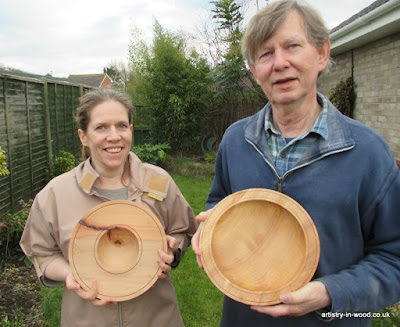 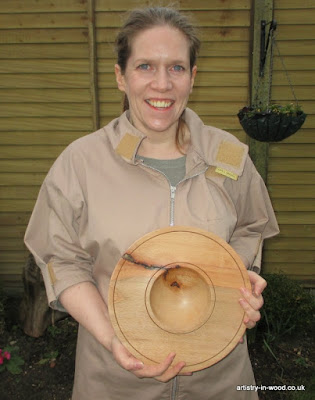 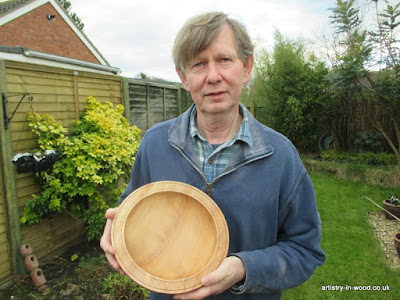 Posted by George Foweraker at 11:47 3 comments:

Jim came to me a few months ago for a Bowl turning lesson
He has now bought himself all the kit and has come back for a refresher.
He has since joined our Burnham on Sea woodturning club and is enjoying his turning
Jim turned four well made items today. 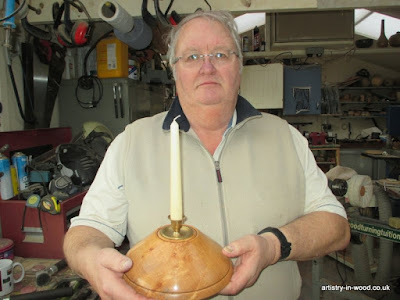 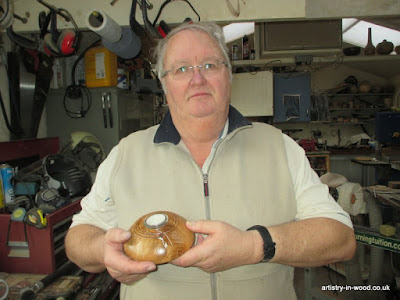 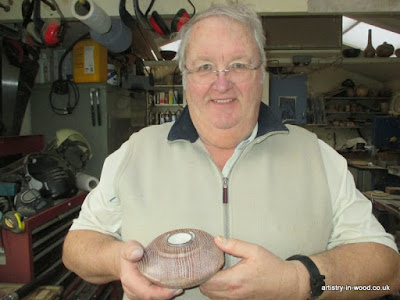 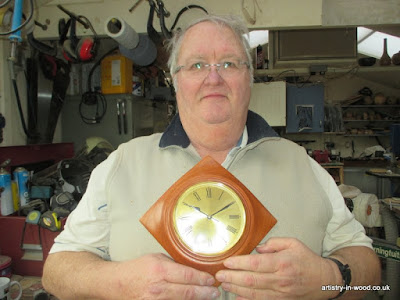 Posted by George Foweraker at 12:37 No comments: