A few weeks ago I was contacted by a Jamie O Halloran who on behalf of the BBC asked me if I would be interested in taking part in a project they were doing.
It transpired that they were filming   "Escape to the country"  in Somerset and wanted the couple involved to as they put it do something of cultural interest.They wanted to spend the day in my workshop and  the couple from Essex to turn something from wood obtained locally.
About four years ago I bought some Beech from a tree that was felled on the Quantock hills due to storm damage this proved to be ideal for this project and would make a couple of nice bowls.
We started filming at nine O clock and finished at three O clock I don't think I have ever been so tired in all my life.I thought we would just do our thing and they would film it but it was not that simple.Lots of things were repeated until they got everything exactly as they wanted it.This made teaching a bit difficult at times as it disrupted the flow of things.The important thing from my point of view was to keep everything safe and professional.The filming and sound were done by Jamie and Dave who were very professional at all times and understood the need to be safe.
Steven and Lyn the couple from Essex who are hoping to move to Somerset where great company and keen to learn.All in all it was a very enjoyable day but very tiring.
Hopefully if Stevan and Lyn move to Somerset they will take up woodturning and come for further lessons.
This program will be screened later this year or early next year.
Apparently the six hours of filming will be condensed into just a few minutes so that will be interesting. 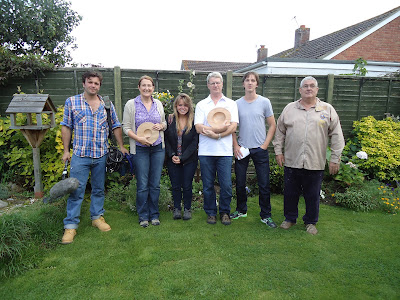